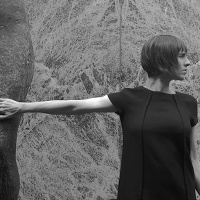 Piece for cello, accordion, dance and electronics composed by  Fèlix Pastor and performed by:

The role of live electronics is to explain the subconscious of the femme. As soon as the first contradictions emerge, the noises and effects transform the two driving voices (represented by the cello and the accordion). In some cases, these transformations are subtile but, in other cases, they fill both the sonic and physical spaces. She can not control it. The only way to escape is to just keep walking in her own way.

The live electronics part is created in Supercollider (availabe in GitHub).

A video produced by Fundació Mies van der Rohe, Enric Llorach  and 15-L Films has been presented at: